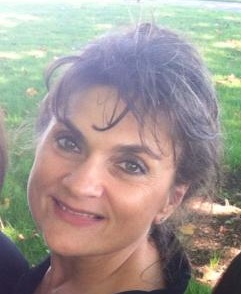 When asked what her favorite thing is about Sonoro, Karen answers, “The members, the girls. The music is wonderful also, but the main thing is the community we have built.”

Karen came to the choir through our Director, Jeremy Shilley. While going through the heartache of watching a parent’s last years with cancer, her father told her she needed to sing. Karen began vocal lessons with Jeremy; to her, that was singing. Then he asked her if she would be interested in joining a choir.

Karen joined Sonoro in 2010 when it was still a mixed choir (men and women). That was the year that there were not enough men to have a balanced choir for a Christmas concert, so there was no concert. Karen stuck with Sonoro in spite of that disappointment; she began as an Alto 1, and is now singing Alto 2.

Karen’s work history is varied. Her last conventional job was with a non-profit in Tacoma. When she was told that they needed to cut her position, Karen began studying medical transcription, and finished highest in her class. She now works from home, can set her own hours, and is always available to take care of the second love of her life, Angel, a Doberman rescue. Karen’s first love is her husband, who is a firefighter, and an expert in classic Chevy truck restoration.

Karen’s favorite musical group is The Beatles. Her mother listened to the Beatles a great deal while Karen was in utero, and the iconic group remains a favorite to this day, although Karen enjoys many types of music. Her favorite music to perform is musical theatre; she feels most comfortable on stage portraying a character. A recent Sonoro concert featured Karen as Monty Python’s Lady of the Lake, and may this author tell you, it was a wonderful performance!

Karen has taught herself to read music; the note tags on her piano keyboard attest to this fact. She works very hard on her music, and although she will most likely deny it, is one of the strongest singers in the group. Her other hobbies include taking care of her chickens, her dobie Angel, running, dog training, and anything with animals.